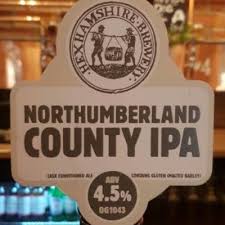 This new beer making use of a new (ish) hop from Charles Faram hop merchants, the beer is based on a traditional British IPA style.

We’re delighted that this new ale came 4th in the Battle of the Beers at Newcastle Beer Festival April, 2017. since the competition we have tweaked the beer again and launched it on a permanent basis.

Brewed with British Goldings and Olicana Hops this is a fantastic sessionable British IPA.

Our latest email for all you beer & Cider lovers. We’re BACK - with even MORE festival to enjoy!
Monday 20th January
Might be doing something special for Fathers Day this year on Sunday 21st.....
Thursday 16th January
If one of your New Year resolutions is to help out in the community a bit more, we’d love to hear from you! We alwa… https://t.co/LTzZbnu3i5
Wednesday 15th January