It was another great festival, with fabulous beers, ciders, gin, wine, sumptuous food and of course great music.

The entertainment moved up a notch too. Here’s some memories of the 3 days. Apologies to the bands and punters who don’t appear yet! We had visitors from London, Sheffield, Manchester, Estonia, The US and Hong Hong!

Traditionally sponsors evening,  kicked off with an acoustic mix from Bob Douglass and Matthew Harding followed by local artists Amy Ridley and Shaun Fenwick. A great start to the festival with some nice interviews with some of our treasured sponsors; Patricia Arnold, MKM Building Supplies and Core Music to name just a few. (interview clips to follow soon).

On Friday the Audio Jacks  got the party started with some cracking rock from the 70’s 80’s and 90’s. A beer festival first for the guys. Hopefully not the last.

Blistered Molly, another festival newbie fronted by local musician Ashley Humble moved us up a notch with classic rock from the 70’s to the noughties. The crazy train pulled into Corbridge. We were also treated to 2 of their cracking original numbers. Watch the charts, folks! See Crazy Train performed by Blistered Molly below:

The Scene was set for the Friday finale. Diablo, closed Friday and lifted the roof of the tent with their indie rock set including a fabulous light show and a few numbers of the 4th Album. These guys know how to rock! What a light show.

This is our family day where we try and mix it up a bit with something for everyone. Easy Tiger woke us up with punchy rock set. Big shout out to Dave on guitar who played through the pain of a bad back.

The heavens then opened but thankfully Marty Craggs little band Jamraised the temperature and roof with their Lindisfarne laced set. Fabulous set, their first with us, not the last!

The tempo moved up and local band Stratosphonic fronted by local musician Shaun Fenwick treated us to great mix of classic rock, soul and indie tunes. Shaun wins the prize for the loudest shirt at the  festival. But then he’s not Superstitious! See Stratosphonic performing this number below:

The Baboons closed the festival for us with a cracking set to keep the crowd dancing – but hey guys a little more drinking too please!

Cracking sound throughout the festival from  Ali and Geoff from Blue Attic (bit of a David Bailey).How they get that many bands through in the time is a miracle. Also a great performance from Steve Keys as compere. Here’s some of his interviews.

Let’s not forget the volunteers including some well known faces.

Take a look at the slideshow of festival memories below. Photos by Sun and Moon. The backing is The Killers’ Human played by; who else, the Baboons.

Something good is coming! Keep your eyes peeled for a special announcement next week – and give our Facebook page a… https://t.co/OOkQtOfxLB
Saturday 23rd May
FESTIVAL ANNOUNCEMENT: Sadly due to the ongoing COVID-19 situation & the risk to public health, the 2020 festival h… https://t.co/H9mLxYcApv
Wednesday 13th May
Due to the current COVID-19/Coronavirus pandemic & public health guidance from UK Government regarding limiting all… https://t.co/2eb7Y4cmG2
Tuesday 24th March 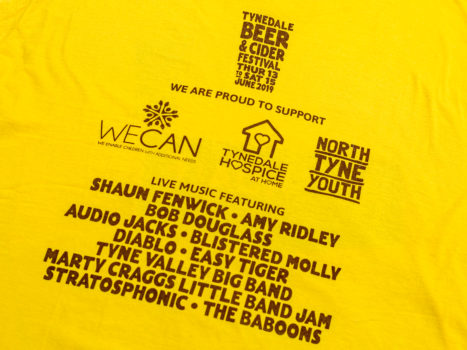